Interested in resources on a specific climate or marine topic? Email seagrantinfo@mit.edu or:

These virtual reality voyages use 360-degree videos to highlight the amazing habitats, animals, and cultural resources you can find in each national marine sanctuary.

360° VR Coral Restoration
Florida Keys National Marine Sanctuary protects some of the most iconic coral reefs in the world, but corals are suffering from disease and other stressors. NOAA and partners are working together to restore these critical coral reefs.

360° VR Sea Lion Encounter
Located off the coast of Southern California, Channel Islands National Marine Sanctuary is a biological hot spot. Swim along with a playful sea lion as it takes you on a tour through the sanctuary’s kelp forests and rocky outcrops.

Episode 47 from The Past Foundation’s Learning Unboxed Podcast: Giving Back to a Future Generation of Underwater Engineers with Marty Klein

Marty Klein, president of Martin Klein Consulting, is a member of the MIT Sea Grant Advisory Committee. Marty did a lot of his work early on through his journey at MIT tied to remote sensing.

MIT Environmental Solutions Initiative, MIT Climate, and EAPS reveal a new way to learn about climate change: the MIT Climate Primer. Read up on the history of climate science and the future of our planet, with loads of bonus materials.

Sanctuaries At Home: Learn about the ocean, atmosphere, and Great Lakes while at home with NOAA’s Office of National Marine Sanctuaries.

Learn what scientists do across a variety of NOAA offices through this series in conjunction with Woods Hole Sea Grant and the National Oceanic and Atmospheric Administration’s Regional Collaboration Network!

In response to the need for online resources during the COVID-19 pandemic, a collection of resources for teaching and learning online for kids, educators, and parents.  A collaboration between different labs at MIT including  The Education Arcade and MIT Open Learning, and the Abdul Latif Jameel World Education Lab (J-WEL).

STEAM Vault includes recommended books and media from Cambridge Public Library and the Cambridge Science Festival (canceled this year) including a fun list of books, podcasts, programs, and virtual experiences for you to explore.

The New England Aquarium is temporary closed through April 3, but you can explore the aquarium from afar with educators Taylor and Nick! Explore Virtual Visits and past episodes of First Friday Facebook Live:

The New England Aquarium shares fun activities for kids with materials that you can usually find at home.

Skype A Scientist matches scientists with classrooms and students around the world using Zoom, Google Hangout, Skype, or other video tool. Families currently learning at home can visit this page to sign up for free.

Step 1: Sign up using this form.
Step 2: You’ll get an e-mail with your scientist match. This might take a few days.
Step 3: You and your scientist chat over email and pick a time to chat.
Step 4: Your family chats over video with your matched scientist with Q&A, not a lecture.

Read about his funded research project with MIT Sea Grant: Quantification of the contribution of wastewater effluent to coastal ocean acidification

Each spring over 1/2 million river herring migrate from the ocean up the Mystic River to the Mystic Lakes and to Horn Pond. You can help document one of the most amazing wildlife migrations in Massachusetts.

SOUNDS IN THE OCEAN

Visit the full NOAA Fisheries audio collection to explore sounds made by marine mammals, fish, and technology, including human-made sounds from shipping, oil and gas industries.

Spectrograms, shown on the right, are a way to visualize sound frequency over time. Scientists with the Northeast’s Passive Acoustics Research Group collected the sounds in this collection.

PBS Games has a wide variety of games and daily activities to choose from by topic, including:

Here are a few climate and marine-related podcasts and episodes that we love! 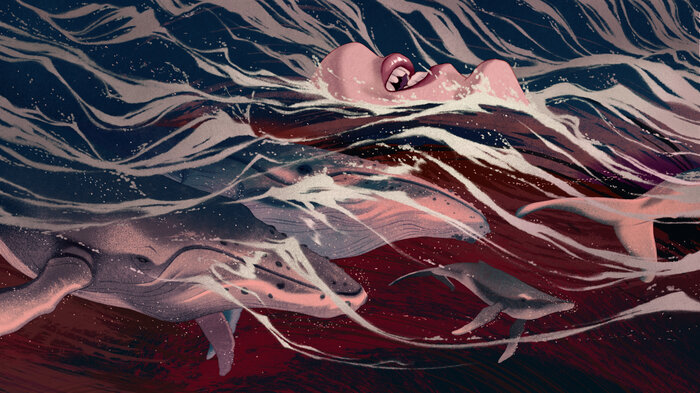 MIT Sea Grant collaborated to develop a web-based data collection protocol for citizen scientists and the National Park Service, for use in research and management planning.

The Delectable Oyster Quest is one of six data quests run by the Boston City Nature Challenge. The goal of this quest was to document the various species within the order Ostreidae, or true oysters, that live in our harbor. By recording the presence of oysters along our coastlines, citizen scientists helped determine whether our native oyster is holding its own, or whether the exotic European oysters truly are taking over.